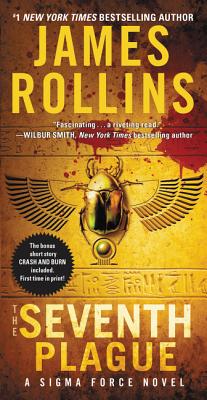 This is book number 11 in the Sigma Force Novels series.

Two years after vanishing into the Sudanese desert, the leader of a British archaeological expedition, Professor Harold McCabe, stumbles out of the sands, frantic and delirious, but he dies before he can tell his story. The mystery deepens when an autopsy uncovers that someone had begun to mummify the professor’s body—while he was still alive.

When his remains are returned to London for further study, alarming news arrives from Egypt. The medical team who had performed the man’s autopsy has fallen ill with an unknown disease that is quickly spreading throughout Cairo. Fearing the worst, a colleague of the professor reaches out to Painter Crowe, the director of Sigma Force. It appears that Professor McCabe had vanished into the desert while searching for proof of the ten plagues of Moses. As the pandemic grows, a disturbing question arises.

Are those plagues starting again?

Then a mysterious group of assassins leaves behind a fiery wake of destruction and death, erasing all evidence. Sigma Force turns to the archaeologist’s daughter, Jane McCabe, for help. She discovers a puzzling connection to a shocking historical mystery that involves the travels of Mark Twain, the genius of Nikola Tesla, and the adventures of explorer Henry Morton Stanley. Now Sigma Force must confront a danger that will unleash a cascading series of plagues, culminating in a scourge that could kill all of the world’s children . . . decimating humankind forever.

“[Rollins is] what you might end up with if you tossed Michael Crichton and Dan Brown into a particle accelerator together.”

“When it comes to the blending of action, adventure, history, and science, there is no other author who does it better than Rollins. Fans of Clive Cussler, Steve Berry, and Michael Crichton should already have Rollins on their mandatory reading list.” — Booklist (starred review)