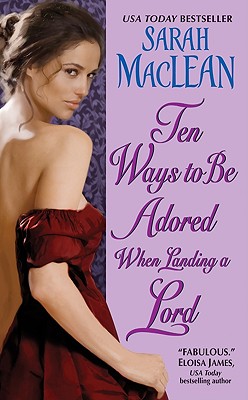 This is book number 2 in the Love By Numbers series.

Since being named “London’s Lord to Land” by a popular ladies’ magazine, Nicholas St. John has been relentlessly pursued by every matrimony-minded female in the ton. So when an opportunity to escape fashionable society presentsitself, he eagerly jumps—only to land in the path of the most determined, damnably delicious woman he’s ever met!

The daughter of a titled wastrel, Lady Isabel Townsend has too many secrets and too little money. Though she is used to taking care of herself quite handily, her father’s recent passing has left Isabel at sea and in need of outside help to protect her young brother’s birthright. The sinfully handsome, eminently eligible Lord Nicholas could be the very salvation she seeks.

But the lady must be wary and not do anything reckless and foolish…like falling madly, passionately in love.

A life-long romance reader, Sarah MacLean wrote her first romance novel on a dare, and never looked back. She is the New York Times and USA Today bestselling author of romances translated into more than twenty languages, a romance columnist, and the co-host of the weekly romance novel podcast, Fated Mates. A graduate of Smith College and Harvard University, she lives in New York City.