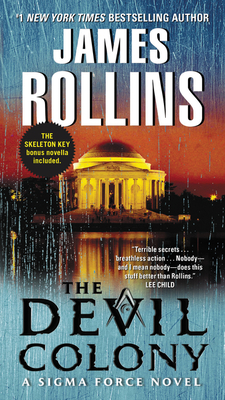 This is book number 6 in the Sigma Force Novels series.

New York Times bestselling thrill-master James Rollins is back with The Devil Colony, another electrifying combination of suspense, history, science, action, and ingenious speculation. In The Devil Colony, Sigma Force stalwarts Painter Crowe and Commander Grayson Pierce must investigate a gruesome massacre in the Rocky Mountains and root out a secret cabal that has been manipulating momentous events since the time of the original thirteen colonies. Once again, Rollins delivers a spine-tingler that will leave fans of Michael Crichton, The Da Vinci Code, and Indiana Jones breathless—as he exposes the dark truth behind the founding of America.

“Riveting....Rollins gets better with each book, and his position at the top of this particular subgenre remains unshaken.” — Publishers Weekly on The Devil Colony

“Terrible secrets, the sweep of history, an epic canvas, breathless action...nobody—and I mean nobody—does this stuff better than Rollins.” — Lee Child on The Devil Colony

“From the hidden Indian treasure, to the Fort Knox secrets, to the conspiracy at the beginning of the United States The Devil Colony gives you every reason why you’ll want to be a member of Sigma Force.” — Brad Meltzer, New York Times bestselling author of The Inner Circle on The Devil Colony

“A first-class, breathtaking adventure that will have readers whizzing through the pages. The only thing wrong with this tale: it has to end.” — Romantic Times (4 1/2 stars) on The Devil Colony