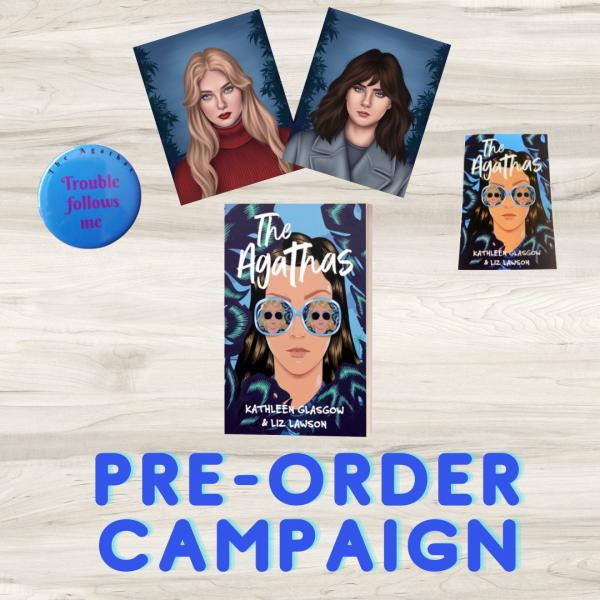 The authors are also offering some pre-order goodies (shipped seperately from the book)!

ALL US pre-orders will receive a book sticker, Alice and Iris character cards, and a book button, but you must email a screenshot (or forward) a copy of your receipt here.

(Pre-order gifts of stickers, character cards, and button are handled by the authors, not One More Page.)

Who killed Brooke Donovan? It’s the biggest mystery of the summer, and everyone in Castle Cove thinks it’s the wrong guy. Fans of One of Us Is Lying and Riverdale can’t miss this page-turning who-done-it that’s sure to be the next must read Young Adult thriller!

Last summer, Alice Ogilvie’s basketball-star boyfriend Steve dumped her. Then she disappeared for five days. She's not talking, so where she went and what happened to her is the biggest mystery in Castle Cove. Or it was, at least. But now, another one of Steve’s girlfriends has vanished: Brooke Donovan, Alice’s ex–best friend. And it doesn’t look like Brooke will be coming back. . .

Enter Iris Adams, Alice’s tutor. Iris has her own reasons for wanting to disappear, though unlike Alice, she doesn’t have the money or the means. That could be changed by the hefty reward Brooke’s grandmother is offering to anyone who can share information about her granddaughter’s whereabouts. The police are convinced Steve is the culprit, but Alice isn’t so sure, and with Iris on her side, she just might be able to prove her theory.

In order to get the reward and prove Steve’s innocence, they need to figure out who killed Brooke Donovan. And luckily Alice has exactly what they need—the complete works of Agatha Christie. If there’s anyone that can teach the girls how to solve a mystery it’s the master herself. But the town of Castle Cove holds many secrets, and Alice and Iris have no idea how much danger they're about to walk into.